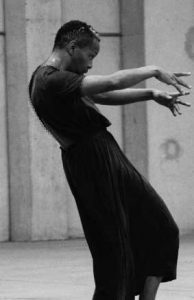 Thami is a choreographer, dancer and teacher, who is a graduate from the Performing Arts, Research and Training Studios (P.A.R.T.S). A contemporary school by a world known choreographer and dancer Anne Teresa De Keersmaeker trained in Classical Training, Contemporary dance and improvisation skills.

His formal training began at Tshwane University of Technology where he trained in Classical Ballet, Contemporary Cunningham, Horton Technique, Graham Techniques, African dances as well as various other dance genres. His dance influences stem from William Forsythe’s Improvisation Technologies, David Zambrano’s Passing Through and Flying Low Techniques, as well as repertory works by Anne Teresa De Keersmaeker such as ‘Rain’ , ’Drumming’ and ‘Grosse Fugue’ which was performed at the Beursschouburg in Brussels.

As a dancer he has worked with South African dancer and choreographer Dada Masilo in her works of ‘Carmen’, ‘Swan Lake’, ‘Rite of Spring’ and ‘Giselle’ which have all toured throughout the world. He has was also a company member of the Forgotten Angle Theatre Collaborative (FATC), which is a South African contemporary dance company by Artistic Director, Peter John (PJ) Sabbagha. He performed in the company’s works such as ‘I Think It’s Hamlet’ (South Africa/ Taipei), ‘One Night Stand’ (South Africa) and ‘Somewhere Out There Life Was Screaming’ which was a collaborative piece between the FATC and Danses En L’r Hangar (Reunion Island). He also worked with Shanell Winlock on ‘Be Still’ (South Africa), Gabi Saragnoffi’s ‘Soritra’ (Madagascar/South Africa).

As a choreographer he created a solo work titled ‘A Last One In Color (him)’, which premiered in Mpumalanga at the My Body My Space Public Arts Festival. In collaboration with various Viennese artists ‘A Last One in Color’ was created and it received awards such as; the Special Mention 2019 RollOut Dance Film Award, Best Story Nomination 2017 Sarajevo Fashion Film Festival, Official Selection 2017 Mosaic Film Festival, Premiered at the 2017 Japanische Filmtage.

In 2018 he collaborated with Chicago based choreographer Mlondi Zondi in a new work titled ‘Tetras Nullius’ which premiered at the ICA Live Arts Festival in Cape Town. He has collaborated with numerous South African artists in works such as ‘Imvelo’ (BlackOut Festival, Dance Umbrella 2018, JOMBA! Festival Premiere), ‘Sub Zero°’ which is a new dance film funded by the Department of Arts and Culture as well as The Dance Factory to present a work at the DC Moore Gallery in NYC.

Majela began teaching classes and workshops in Movement Studies and Floor work for the Dance Factory Kids Programme, Vuyani Dance Company, Moving into Dance Mophatong, Joburg Ballet Theatre Outreach Foundation. He has toured his classes/workshops to various regions in South Africa such as Kwa-Zulu Natal, Gauteng, Northern Cape, and the Free State with aims of to making dance training accessible. He was also invited to teach in Switzerland, during his Residency through the Pro-helvetia: A residency to research and create a collaborative work with Swiss artists and attended workshop with the Swiss Dance Company under the direction of Laurance Yadi and Nicolas Cantillon, Cie Compangnie.