There’s magic in our energy, our spaces, our people and our discoveries. 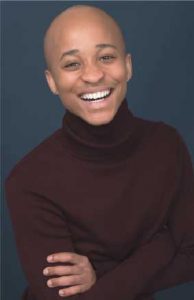 As an award winning dancer, actor, singer and choreographer, Sonwa returns to South Africa with a wealth of knowledge and an eclectic array of international experience from productions and training programmes from around the world.

Sonwa is an energetic and enthusiastic teacher whose classes focus on developing strong technique, performance and individual artistry within each student he teaches. He graduated top of his class from the highly acclaimed Waterfront Theatre School in 2014 where he trained in Musical Theatre, Drama as well as Advanced levels in Modern Dance, Tap Dance, Classical Ballet and Jazz Dance. Sonwa also earned professional teacher status from the internationally recognized Imperial Society of Teachers of Dancing (London) in Modern Theatre Dance (A.I.S.T.D.) and Tap Dance (A.I.S.T.D.)

Upon graduation he went onto further his studies in New York City at the famous Broadway Dance Center, Alvin Ailey School and Martha Graham Center for Contemporary Dance. It is at the Martha Graham School where he was offered a scholarship and worked as an intern for the Martha Graham Dance Company. Some of his New York credits include dance captain for the off-broadway production of Crybaby the Musical in 2018. He worked with Danielle Pollanko (choreographer for Beyoncé), Rachel Rak and Yanis Marshall to name a few and served as Production Assistant to Tony Award winner Baayork Lee.

In theatrical and corporate stages both nationally and internationally he has performed in numerous productions such The Lion King, Hairspray, Richard Lorings African Footprint, A Chorus Line, Footloose, Estée Lauder Product Launch, West Side Story, Joseph and the Amazing Technicolor Dreamcoat, British Airways Commercial and Guys and Dolls. His TV credits include playing a lead role on SABC2’s Hectic Nine9 youth show Signal High. As a choreographer, he choreographed for the Netflix series Blood Drive, EC Provincial Cultural Awards and stage productions of The Jungle Book, Alladin and I Love You, You’re Perfect, Now Change.

Since returning back to South Africa, he choreographs, teaches and adjudicates competitions and eisteddfods all over the country whilst striving to create platforms for young performers from all communities. In 2018 he won the award for Best Choreographer at the EC Cultural Awards and between 2019 and 2020, served as the Artistic Director and consultant for the Johannesburg based Glam Dance Company. He currently is a member of the International Dance Council CID (UNESCO) and has been recently awarded the 2020 Eastern Cape Department of Arts and Culture MEC’s Special Award for Performing Arts.